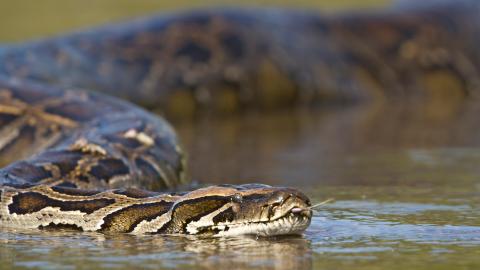 Anacondas are the biggest type of snake in the world and as a result, it didn’t take long for this recent footage of a man trapped in one of these snakes’ lethal embrace to go viral. The man had to be helped and rescued from the horrible snake’s deadly grip.

It’s impossible to imagine what would happen if you ended up in an anaconda’s deadly embrace. Unfortunately, however, this is exactly the situation that the man in the video above found himself in. This situation would most likely be so terrifying in fact, that we bet none of us would know what to do.

Anacondas are the biggest type of snake on the planet and can grow up to more than10 meters in length, measuring more than 30 centimetres in diameter and weighing an average of 2,000 kilograms. Without a doubt, this snake is the most striking and impressive serpent that you will ever come across anywhere in the world.

Despite its enormous size, however, anacondas aren’t poisonous snakes but are actually known as constrictors, which means that they trap their prey by coiling themselves around their body to crush them and then swallow them whole. Their grip is deadly.

And that’s what happened to this man who found himself in the not-so-loving embrace of one of these reptiles and it wasn’t so easy for him to get free from the snake’s lethal grip, as you can see in the video at the top of this article.

We’ve seen lots of videos ofsnake attacks, but never have we seen an anaconda who has managed to trap a man like the one in this video. Don’t forget to check out the video above for all the details.