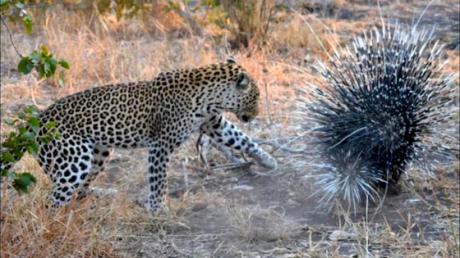 The footage is incredible: a leopard was filmed attacking a porcupine… unsuccessfully. As the likely prey, the rodent ended up being more cunning and sneaky that its predator.

This animal surely learned its lesson! In the middle of the Savannah, a leopard was filmed attacking a porcupine… unsuccessfully.

With its quite imposing body for a rodent, porcupines might seem like interesting prey to predators. Except these predators tend to forget that this animal isn’t completely defenceless.

They also have quite an impressive weapon: their sharp, sturdy spines that can easily become buried in their predator’s skin.

Stronger than the feline!

A leopard recently paid the price in Kruger Park in South Africa after making the terrible decision to attack two porcupines. The feline then had to spend a few minutes picking the spines out its body before running off into the undergrowth. A lesson that the leopard probably won’t forget anytime soon!

>>> Check out the video to see the incredible fight

A while ago, a boa constrictor found itself in the same painful predicament. Unfortunately, the snake probably ended up worse than the leopard.