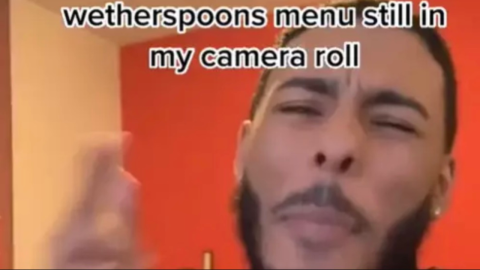 J Salsa, fired by pub bosses for showing his fans TikTok fans how to recreate Wetherspoon’s famous dishes such as their Full English Breakfasts and Curries has hit back by stating he’s sitting on a ‘bad-boy piece of information’.

Salsa has managed to stack up a sweet 88,000 followers on TikTok following his famous Wetherspoon videos. However, after showing internet users how to recreate the pub’s best dishes from scratch, Salsa was fired for breaking company policy. He stated:

To my expectations, I've been fired... I've been withdrawn from JD Wetherspoon. I'm not surprised at all because at the end of the day, I did break company policy. I did have my phone in the kitchen and I did post work stuff on social media.

Salsa continued to state that talking about his suspension on social media basically sealed the deal that he would be losing his job:

Basically, they brought up the fact that I continued to post about my ongoing investigation like when I announced the suspension. I feel like I would have been fired either way to be honest because that s*** went viral. That s*** hit headline news, it was crazy, it's actually mad what's gone on in these two weeks.

But it seems that this TikToker’s acceptance of defeat has finally worn off and he’s looking at returning to the game. After all, he has no job to lose and only more followers to gain. J recently released in a video stating ‘I'm sitting on a bad-boy piece of information’. The video was accompanied by a caption from J claiming he still had half of the Wetherspoon’s menu still in his camera roll.

No doubt any more Wetherspoon menu secrets will only boost J Salsa’s following further. The ex-chef gained over 1 million views alone from his Full English Breakfast video which showed that some items such as eggs, bacon, steaks, burgers and sausages were all cooked fresh, others like the curries were microwaved from frozen.

Before he was sacked from his job J Salsa spoke to the Sun stating:

The curries are microwaved - I thought that was obvious. How do you get a curry in five minutes for five pounds? They're quite nice even if they are microwaved.