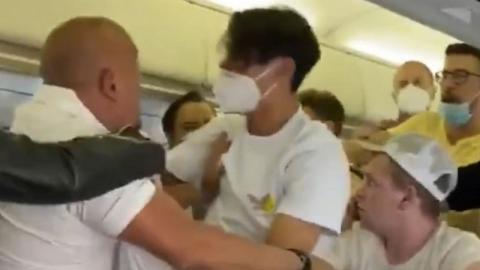 Two drunk men started a fight on a flight from Amsterdam to Ibiza after refusing to put on masks despite government regulations... and the safety of all people aboard.

Since the coronavirus entered our lives, affecting the entire planet, wearing a mask on planes has been mandatory. However, this regulation appears to bother some people, who feel compelled to break the rules.

We've seen people get escorted off planes and physically restrained in public for their non-compliance with regulations pertaining to masks. We've even seen people get arrested for using a cough as a weapon.

And once again, yet another video showing some anti-maskers causing trouble aboard a plane. Buckle up for this one.

Just a couple weeks ago, a video was taken on flight KL1495 from Amsterdam (Netherlands) to Ibiza (Spain). Two men, who according to witnesses were very drunk, got on the plane without masks. When reminded, they refused to put masks on. One of the two men stood up and walked inside the aircraft right before landing when the order to remain seated had already been given. He then allegedly hit another passenger, sparking a fight. Sounds like a real intelligent bloke, that one.

You can see the scene unfold in the video above. In the end, the offenders were restrained by other travellers and arrested by the police on arrival, according to the airline, KLM. "Safety was not compromised during the flight," the company added.

health
No connection
Check your settings