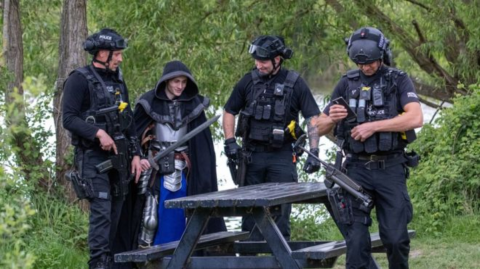 Recently, armed police responded to call regarding a knight in shining armour wandering in a park in Cardiff, Wales.

Onlookers held their breath as they watched officers approach the man who was dressed in full-blown medieval knight garb seemingly doing some laps at Hendre Lake Park in St. Mellons, Cardiff.

Responding to a call regarding a 'suspicious-looking individual' passersby watched at the police told the young man at gunpoint to lower his weapon. They stated that he seemed to be in shock when asked to put down the sword he was carrying.

It turns out that the young man, Lennon Thomas, 20, was simply trying out a new outfit he had purchased for practising a favourite pastime of his. The sword itself was a foam toy that wouldn't be able to harm anybody. However, the Dungeons and Dragons did state that perhaps bringing the sword wasn't the smartest move:

Perhaps it was a little stupid of me to bring the sword as from a distance it does look realistic.

"Life is a lot more fun when you don't care how weird you are."

It seems as though the young man is not afraid of judgement or criticism from others as he was perfectly comfortable walking around the park dressed like someone coming out of the 14th century.

While saying that the sword may have been necessary he added that:

...the rest of my outfit was simply me practising for a hobby of mine.

The incident with the responding police officers naturally attracted some passersby to investigate the scene. In good spirits Thomas joked to them:

...if I were in America I would have been shot on sight.

I got a good laugh out of it all in the end.

The South Wales Police said that the officers were responding to a report from a member of the public, a spokesperson for the Police force stated:

Officers were deployed to the scene where they located a young man who was in a fancy dress carrying a toy sword.

In the end, it was determined that Thomas had been doing nothing wrong and officers sent him on his way.

Live-Action Role-Playing or LARPing for short is actually a widely practised hobby from the UK to the United States. Numerous individuals partake in this fantasy pastime that lets you live a different life for an afternoon, unfortunately, Lennon is forced to practice alone during the current period of lockdown due to the coronavirus. 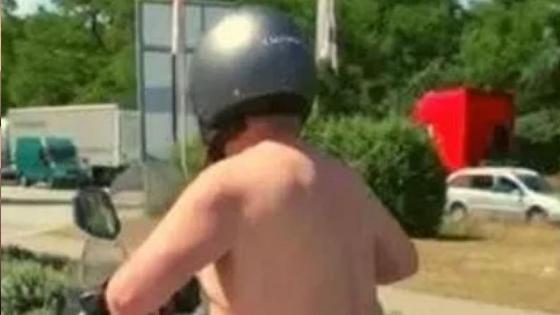