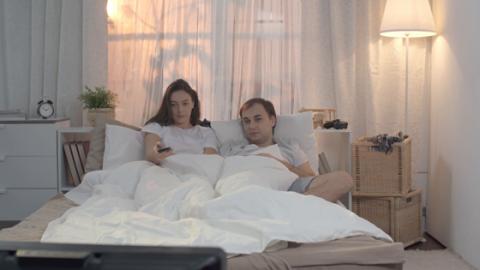 Could TV in bed be a real mood-killer? Television could indeed widen the distance between a couple if it’s misused. However, it could also produce lovely shared moments and under no circumstances prevent you from snuggling up together.

TV isn’t necessarily ideal for producing conversations in relationships. It can be difficult to drag your eyes and attention away from it once it’s turned on. When it’s introduced into the marital bed, it can also become libido’s worst enemy.

Whereas the bedroom is a place which is supposed to bring couples closer together, television could disrupt this intimate space and could even become “an excuse for avoiding having sex”. What’s more, it adds in factors like hyperconnectivity (using lots of electronic applications) or stress, which stop us from listening to our bodies and desires. The bedroom, which should be a shield against these factors, may in turn become one of them when you introduce a TV.

However, we shouldn’t completely demonise televisions, which may bring couples together if used correctly. Talking or having physical contact in front of a programme, for example, are two ways of encouraging couples to become close, and not killing the mood. The important thing is to communicate this to your partner so that you can both take full advantage of it.