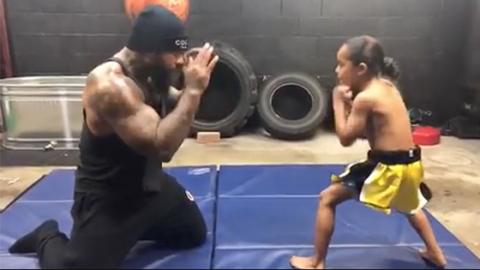 Former kickboxer and MMA fighter James Wilson trains his son to box. The least we can say is that his offspring seem to be cut from the same cloth as his father.

James ‘The Beast’ Wilson is one of the most original fighters when it comes to social media. With his 184K subscribers on his Instagram account, the American is also famous for having participated in (and lost) one of the ugliest fights against Frenchman Patrice Quarteron in 2017.

Since then he has taken the long road to get back into the ring again and he sometimes surprises with his ‘brutal’ training methods. Sometimes he takes the opportunity to bring his son with him just as Ivan Drago trained his son in Creed 2. There are several clips of his two children, and we have chosen one whose determination seems to be foolproof.

Just like his father, he concludes the video with a ‘Beast mode or no mode. I don’t want no smoke.’ Intriguing to say the least.