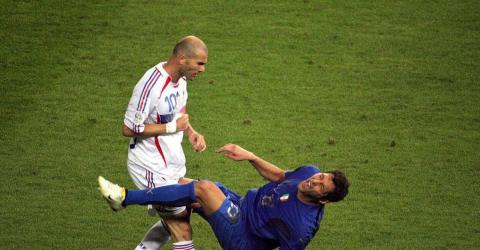 Even today, everybody still remembers Zidane’s headbutt. And Jean Pierre Paclet, who was the doctor for the French team in 2006, recently spoke out about the Zidane-Materazzi story, adding a new, rather significant detail.

In 2006, the Italian team won the World Cup in a match against France. A painful memory for the French team made even more memorable because of Zidane’s headbutt directed at Materazzi. Although the reasons behind this are now well-known, the French team’s doctor at the time has recently revealed quite a juicy bit of extra information about what happened just before this drama took place.

Because he had injured his shoulder, Zidane had to receive medical care and Jean Pierre Paclet rushed onto the pitch to examine the French player. Then, Marco Materazzi apparently said to the doctor: ‘Don’t tire yourself out, doctor. The old guy’s dead.’ And this apparently infuriated Zizou…

And yet, since then, things haven’t exactly rosy for Zinédine at Real Madrid. However, he is nevertheless consoling himself with the three Champion’s League titles he has amassed. Understandable, since the three trophies were won consecutively, and he is just yet another strength for these players who have already won this trophy as well as the Euro and the World Cup.