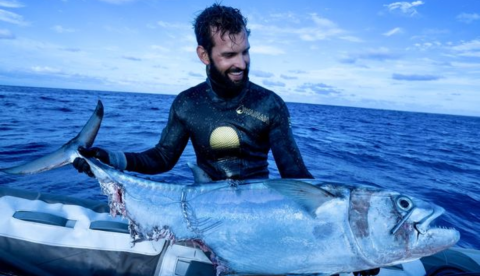 Cole Harrison was out fishing between Tahiti and Fiji when he managed to catch an incredible dogtooth tuna. Unfortunately, the ocean was unprepared to give the fish up as three sharks tried to steal it. What resulted was a tug of war between a man and three death machines.

Footage shows Cole Harrison snag a huge fish, but the tuna acted as shark bait and three reef sharks decided that they too would try to make a meal out of the struggling tuna.

In a battle to keep his catch, Harrison tries to drag the tuna on board. But, the sharks wouldn't let goand ended up just a few metres away from him. Cole stated:

"We were fishing at this spot and the sharks don't have much experience of people and they weren't shy of coming at us."

To make matters worse, Cole wasn't just fishing from the line, he was spearfishing. Which means he was actually in the water with the hungry sharks:

"Five seconds later he was right there and we were able to bring the fish onto the boat which the sharks were trying to take it out of my hands."

Cole ended up calling the boat over to help him and together they managed to win the battle and bring the shark on board.

Harrison managed to keep cool during the encounter but personally, I don't think I would have made it out alive. The fisherman claims that he has spent many years in the water with sharks and although they can be dangerous, he seems to have a sixth sense for the creatures:

"I stayed calm, it's just experience. I've been diving with sharks my whole life and I've been fishing since I was 10-years-old. "I've been butted by them before and have friends who have been bitten by sharks. It was fortunate that everything worked out, I had a really small window to land the fish and take it from the sharks. If I didn't get the boat there then we would have lost the fish. For sure I was worried about getting bitten, there was a lot of adrenaline."

He continues: "It's risky, reef sharks are the most notorious for always biting people in the water."

"In this pure clean water at least you can see them coming. You can get a gauge on how the sharks are behaving."

"They're kind of like dogs, you can see when they are fired up. You can read sharks,I was fortunate there were only three of them."

The avid outdoorsman has tried catching dogtooth tuna three times before but claims that each time, they get stolen by cheeky sharks trying to catch an easy meal.

You can watch the footage of the incredible encounter above!