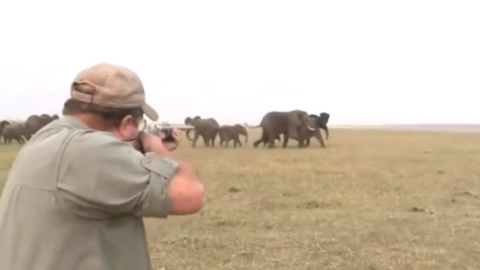 "Hit it between the eyes": clip shows two heartless hunters, armed with rifles, sneaking up on a herd of elephants and shooting, before the rest of them charge at the two men.

Scandalous footage has emerged showing a raging herd of elephants in Nakabolelwa Conservancy, Namibia charging towards the two armed men after they shoot and kill one of their bull members.

The two callous men are seen shooting 3 times before they realise that they're in danger. Whilst the injured elephant bull stumbles and gives in to his injuries, the panicked and enraged parade of around a dozen of 7-tonne elephants come charging and the bewildered men, as they begin to run and curse at the spectacle.

It is alleged that the video has been filmed around 4 years ago, but only now has surfaced online. Whilst hunting of this nature is hugely frowned upon in Africa, it remains legal under strict regulation.

Crone Kruger, a Namibia-based professional hunter, commented on the incident explaining that, due to an incredibly low quota of African elephants worldwide, hunters "only hunt two elephants a year". Hunting safaris are also offered by several Namibia-based companies, which can be rented by foreign nationals - no licence required.

Whilst there were as many as 3-5 million Africanelephantsroaming the sub-Saharan region throughout the early 20th century, only around 415,000 are left in the world today.