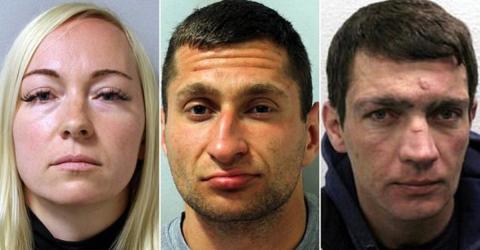 One mother from Dartford, Kent, was romantically involved with two men, and she thought the best way to settle who would win her hand would be by orchestrating a fatal duel.

Asta Juskauskiene, 35, may have to spend the rest of her life in prison after she organised a fight-to-the-death-medieval-style duel between her ex-husband and lover.

Asta was once married to Giedruis Juskauskas, 42, but she was also romantically linked to Mantas Kvedras, 25, a former prisoner. Apparently, Asta left her husband Giedruis when she started to see Mantas.

But the mother still had a physical connection with her ex-husband. Therefore, both men felt like Asta belonged to them. In TV dramas, men usually fistfight in a bar over their loved one, but the 35-year-old woman had a more dramatic idea.

The love triangle prompted Asta to orchestrate a deadly, medieval-style duel between the two men to see who would win her hand. (Is this a Shakespeare play?)

The deadly duel took place in a Stratford alleyway. While the men battled to the death, Asta stayed home with her youngest child, one she shares with her ex-husband. Who won the deathly battle? Well, Asta’s lover Mantas won the fatal battle, but it looks like, despite his win, they will remain separated forever, behind bars.

Curious as to what happened in the deathly fight? What about the sentences Asta and Mantas will face? Take a look at our video for more intriguing and shocking details.