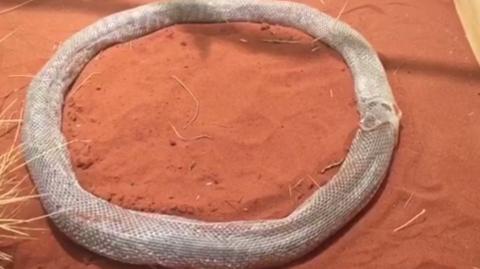 A python that lives in an Australian centre for reptiles became the victim of a strange mishap, after being found stuck in a tube made from its own dead skin.

The 15th of June was an especially difficult day for a snake that lives in the Alice Springs centre in Australia. This centre is where reptiles are kept in captivity and raised, and its also where the python was the victim of a pretty unique mishap, to say the least.

This is according to Red Neindorf, the manager of the centre. Apparently, this snake named ‘Tim’ was found trapped in its own dead skin whilst moulting. The incident, which was partly filmed, lasted several hours and left the people who were there watching the incident somewhat confused.

Throughout the footage shown above, we can see the animal forming a completely regular circle with its body and its own moult. According to Rex Neindorf, the python found itself in this unfortunate position from trying to bite its tail and get the dead skin off.

The result? Instead of getting the dead skin off, it formed a tube behind the snake. It slipped into the sheath to try again but this time it was too difficult to come back out. It took almost three hours for Tim to stop going round in circles in the trap and to finally find a solution to the problem.

The manager explained that the snake ended up making a hole to squeeze out. He said that in his 30-year career, this is the first time he’s seen anything like this. After posting it on Facebook, his video was met with great success.

In the description, he says “Have been in the reptile business a long time and have never seen anything quite like it. Have seen similar but nothing as perfect as this.”. We’re not sure if Tim thinks of it that way…

Check out the video above to see this bizarre phenomenon for yourself!