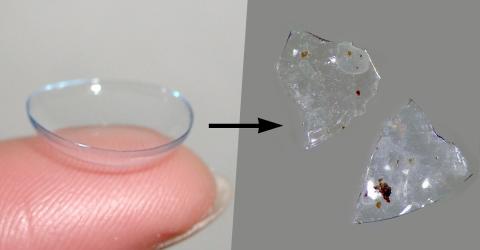 A new report in America has revealed a disturbing trend; nearly 20% of people throw their contact lenses down the drain, an act which has worrying ecological repercussions.

It seems that we too often have the tendency to mistake our drains with the rubbish. According to a new report presented August 19th in Boston, 19% of contact lens wearers throw them down their sink or toilet after use. A habit that, according to this report, has serious ecological implications.

It always starts with a personal experience. ‘I've been wearing glasses and contact lenses for most of my adult life,’ says Rolf Halden, director of the Biodesign Institute's Center for Environmental Health Engineering at the University of Arizona. ‘Then I started to wonder if studies had been done on what happens to lenses at the end of their use period.’

This is how he and his colleagues Charles Rolsky and Varun Kelkar began to lead the investigation. The team, which was already working on plastic pollution, was surprised to find no research on the subject. A first survey revealed that of the 139 participants (contact lens wearers or not), 19% in all threw their lenses down the drain after use. Certainly a small sample size, but which nevertheless reveals a problem of great magnitude.

‘This is a relatively large number considering that in the United States alone, 45 million people wear contact lenses, which represents between 1.8 and 3.36 billion contact lenses thus discarded every year, i.e. 20 to 23 tonnes of plastics discharged into wastewater,’ says Halden.

From your eye to your plate

The next step for researchers was to estimate the impact of this unknown plastic pollutant. To do this, the team analysed 11 different types of lenses, as well as the content of the waste collected at wastewater treatment plants. As a result, a pair of lenses can be found for every 900 grams of solid waste collected. Unfortunately some of this waste is used to treat the soil, opening the door to the diffusion of lens microplastics into the ground where we grow our food.

This treatment may also pollute surface water and cause serious harm to aquatic organisms. These organisms regularly confuse microplastics with food, and it is on our plate that this microscopic waste finally ends up, before entering into our digestive systems. The lenses are not only transparent, making them difficult to detect, but they also consist of uncommon plastics that are not searched for in environmental monitoring studies’ routine tests.

‘These are medical tools, they are not made to be particularly biodegradable,’ says Halden. ‘Although they are of course beneficial to their wearer during their use, they are much less so when they escape into the environment.'

What should you do with your lenses? Throw them in the bin with the rest of your household waste, and consider recycling their packaging according to the criteria prescribed by the brand you use.