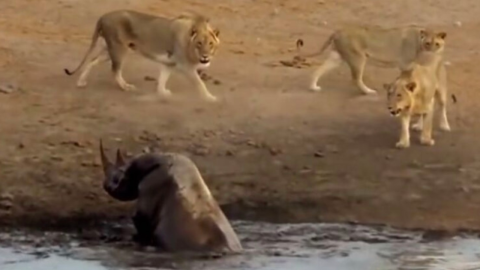 Strength in numbers? A video filmed in Kruger National Park in South Africa shows the exact opposite of this saying when 3 felines decided to take on a rhino that was in a sticky situation.

Upon seeing this rhinostuck in the mud, these three lions thought they had found very easy prey for their next meal. With its hindquarters trapped, the threatening mammal couldn’t manage to get out of his sticky dilemma. With no pity for its situation, the predators cautiously but surely approached the animal. Although stuck in the mud is just a game for children in the UK, the reality is a lot crueller in the wild!

A fight worthy of the Big Five

Filmed during a safari in the Kruger National Park in South Africa, this scene surpasses everything that we could have imagined. It shows animals worthy of fighting in the Big Five. There are 5 big mammals that are both feared and respected in Africa, notably mentioned by Ernest Hemingway in his short story The Snows of Kilimanjaro. These animals include an elephant, a leopard, a buffalo, a rhinoceros and a lion. And two of these previously mentioned species gave tourists a rather unexpected show.

An unfair and unequal fight, and yet…

Profiting from a delicate situation involving a rhino stuck in a body of water, the 3 lionslicked their chopsand decided to put this animal on the menu. The predators approached the poor rhino that is currently under huge threat of poaching in countries such as this (more than 1,000 rhinos were killed in 2017 according to the Department of Environmental Affairs in South Africa).

They are capable of reaching more than 1,400 kilos in weight and the rhino seemed to be finding it difficult to get itself out of the muddy body of water. The threatening presence and the kicking of 3 lions definitely didn’t help at all! It ended up reaching the mainland and then had to fight its aggressors that didn’t hesitate to pounce and sink their teeth in. Moved by its survival instinct, the victim decided to defend itself by delivering a huge blow with his horn. Disappointed, the 3 lions had no other choice but to retreat and go find something else to eat. 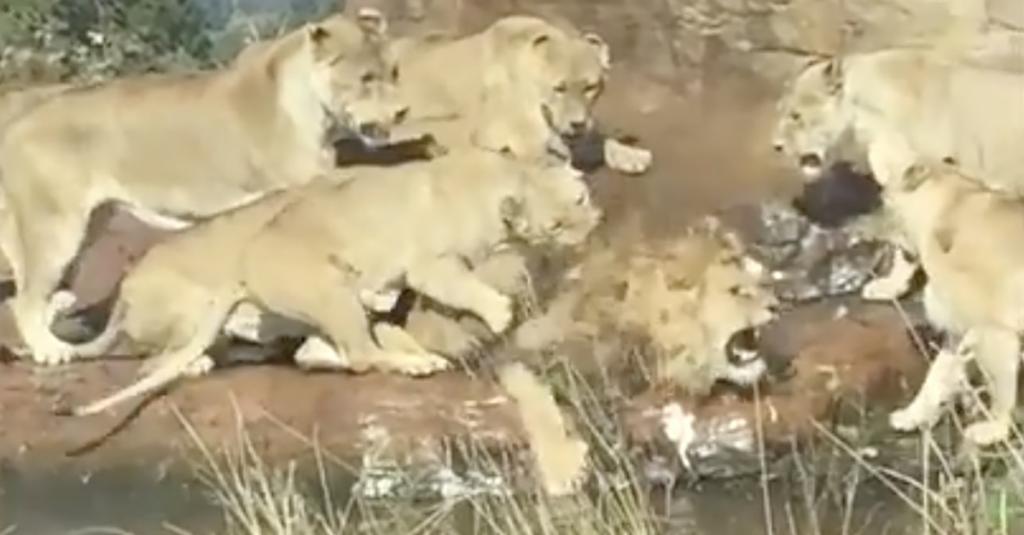