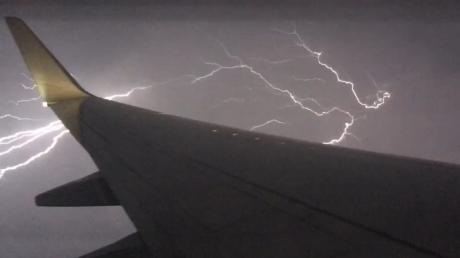 If you have a fear of flying, don’t watch this video!

When you get on a plane, it often means that you’re going on holiday to clear your head in some kind of heavenly place, so it’s a really good feeling. Unfortunately, some flights can be more unpleasant that others… Between inconsiderate passengers and turbulence, sometimes flights can be really awful! And if lightening gets involved, it’s even worse…

Footage that will send shivers down your spine

From one of the windows on a plane, a passenger filmed quite an impressive scene. Their plane was travelling through a period of quite terrifying lightning flashes for a few minutes. Because the footage was taken during the night, it’s easier to see the lightning and we can see just how close it gets to the aircraft! We can easily imagine how terrified and panicked the passengers on the flight must have felt!

Phenomena that could get worse

Luckily, the pilot was trained and skilled enough to be able to pass through the lightning and land safely. However, judging from the fact that climate change is only going to increase the amount of turbulence during flights, pilots on board need to be able to deal with every type of situation since it’s impossible to know what could happen…

So, what about you? Have you ever been on a flight with such extreme and terrifying conditions like this?