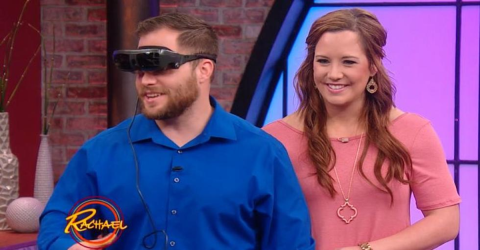 When an American TV show gave this man - who is visually impaired - the opportunity to see his girlfriend for the first time ever, he was quick to seize the opportunity.

Some people, unfortunately, suffer from conditions and impairments that can make their lives and the lives of their loved ones rather difficult. But thanks to advances made in technology over the years, there are now various products and methods available to help improve the quality of these people's lives and make things just that little bit easier.

Take this story for example. This scene took place on the American television show The Rachael Ray Show. Hunter Tribe, a young man who is visually impaired, has never been able to look clearly at his girlfriend Brittney Reed because of a degenerative disease affecting his eyesight.

With the help of the presenter of the show and a scientist, the young man tries on a revolutionary pair of glasses, intended to offer him a perfect 'bionic' view.

As he puts on the 15,000 dollar glasses, the audience holds its breath while waiting for the big moment of emotion - as Hunter's view is shown on a big screen behind him. But the first thing Hunter focuses on makes them burst out laughing...

Check out the video above to see his reaction!