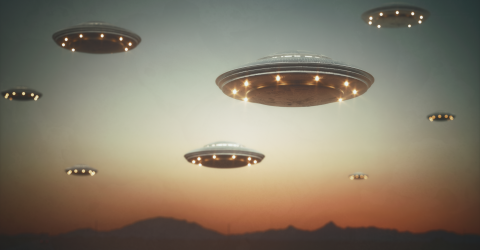 A live camera feed recently caught a UFO following the International Space Station—it was hovering between Earth and the ISS. The entire situation has everyone equally as confused!

No one can explain why a UFO was hovering between Earth and the International Space Station for around 20 minutes. Could it be intentional? Time will only tell!

Scott Waring, a UFO enthusiast, shared the 22-minute video on his Youtube channel, ET Data Base. In the video, you can see that the UFO emulates a similar speed and pace as the ISS.

At the end of the live footage, the UFO skyrockets up and vanishes, leaving a blast of green light in its dust. Before NASA notices the UFO, the video captures some workers casually chatting about adjusting and fixing the space station.

But then the camera suddenly zooms in on something—the UFO! Waring, the UFO enthusiast shares, “That is NASA zooming in on the UFO, not me. They are as baffled by it as I am. They don’t know what it isor why it is there.”

Waring also notes that “During the feed, they mention coordinates, and that could be secret code as to the location of the object. They don’t want to be too obvious.”

He claims that he has never seen a UFO look this way before. Waring said, “It looks like it’s in a cone-shaped. I’ve never seen a module in this shape.”

So what does Waring think it is? Who does he think this strange UFO belongs to? We will continue the conversation in our video. Be sure to watch it for more discussion on the reasons why this UFO may exist!