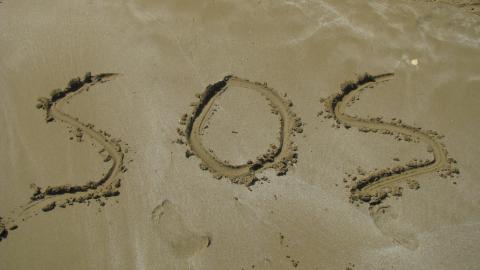 Three men were stranded on a deserted island in the Micronesia archipelago. Luckily for them, the universal signal for help, SOS, undoubtedly saved their lives.

According to authorities they men were on the route by boat from Pulawat atoll and were hoping to travel to Pulap atoll on their 7-metre-long boat when they, unfortunately, got lost and ended up running out of fuel.

The men had been missing for three days when they were eventually found. Luckily their distress signal they had written on the beach of the uninhabited island they were staying on was spotted by searchers.

U.S. searchers in Guam needed some assistance looking for the men, so they asked Australia for help. Australian military vessel Canberra was returning home from military exercises in Hawaii when they were dispatched to assist in the search for them.

The men were found 190 kilometres from where they had set out when their signal was spotted from above. An Australian helicopter was able to land and give them food and water. Luckily were found in good condition, though undoubtedly missing home.

Captain Terry Morrison of the Canberra made a statement about the mission:

If you ever find yourself stranded, don't forget this internationally recognized distress signal: SOS.