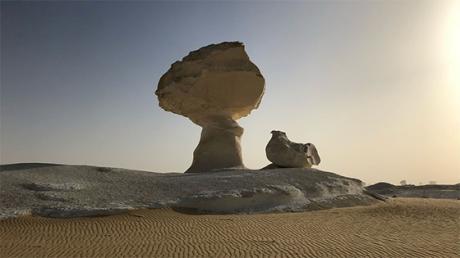 The white Egyptian desert makes an impressive spectacle. Nestled between the Baharya and Farfafra oases, it possesses extraordinary natural chalk sculptures of an immaculate whiteness.

The white desert is a ‘reg’ – a desert pavement – situated in the North East of the Sahara. It is so splendid that you have to have seen it once in your lifetime. The rocks that scatter it have been formed by the wind for centuries, which gives them their strange and intriguing shape.

Like mushrooms formed out of rock, the natural structures seem as if they have been placed on the yellow sand that surrounds them. A magnificent landscape nestled between sand dunes that you can admire on camels, on foot or from a rental 4x4 during a several day trek.

Under a deep blue sky, these natural gems are spread out over 3000 square metres. So, if one day you go and discover Egypt, don’t forget to go there in between two tours of pyramids.