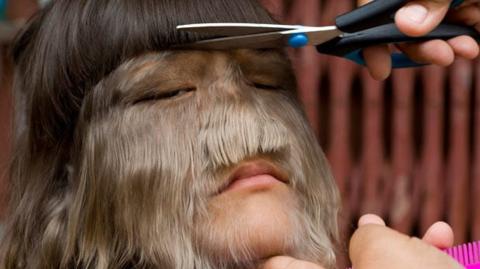 Supatra Sasuphan, given the title of hairiest girl in the world in 2010, has grown up quite a bit. At now now 19 years old, she’s even found love.

Nine years ago, the world met the 10 year old Thai girl named Supatra Sasuphan. The young girl was a bit different than the average 10 year old girl; she had a face covered in hair. Supatra is afflicted by hypertrichosis, a syndrome that causes an abnormal amount of hair growth. In her particular case, the majority of the hair growth is localised entirely on her face, with hairs growing as long as the hairs you’d find on her head. Her abnormality has earned her the honour of being included in the Guinness Book of World Records.

Years ago, despite the numerous insults and comments she received as a child, she succeeded in keeping a positive outlook towards her situation: ‘I don't feel any different to anyone else and I've got lots of friends at school’, she’s stated. Regardless of the fact that she received her fair share different insults growing up, Supatra claims that she no longer receives the mean comments that she once did, like being compared to a monkey.

Even nowadays, the 19 year old is overjoyed. In fact, she met a young man who she intends on marrying soon: ‘You're not just my first lover, you’re the love of my life’, she declared on her Facebook page to her soon to be husband. When it comes to her hair, she now shaves it as soon as it becomes too long. While some had suggested laser treatment, it's never worked for her.

Check out the video above to see Supatra today!

He Couldn't Bear To Look In The Mirror... Now He's A Bodybuilding Champion