In China, one farmer got the surprise of a lifetime when he came across a rare type of spider which only been sighted six times in decades.

In the Sichuan Province in southwest China, a farmer had a pretty strange run in. Whilst working on his orange grove in November 2016, he came face to face with a little spider that is like no other. Yes, it had eight legs and chelicerae like other spiders, but this one stood out because of its belly.

Its stomach had a round and flat base, as if it were “attached to a disk”. When the farmer saw the spider, he thought at first that it was some kind of relic before he realised it was alive. Intrigued, the man (Li Wenhua, according to Chinese media) captured the arachnid and brought it to his house.

After having called his neighbours to come have a look at the animal, the farmer did a bit of research online and found out what type of spider it was. This one belongs to the Cyclocosmia genus, which refers specifically to mygalomorphus animals. They are characterised by their truncated stomach and the rigid disk at the bottom with a pattern that varies from one animal to another.

A specialist at the Insect Museum in western China, Zhao Li, was quoted confirming what the man had found by People’s Daily Online. He said that it is, more precisely, a Cyclocosmia ricketti. It's an incredibly rare spider and only six others like this have been sighted since 2000, when it was rediscovered in Sichuan. “The spider is of extreme scientific value, and it is definitely a rare species in Sichuan province” explained Zhao Li, adding that he has failed to find it several tiles. It may even be the first time that the spider has been sighted as far north, as in the past; it had been seen in the southern provinces of Fujian and Zhejiang.

The scarcity of this arachnid can partly be explained by its way of living. Cyclocosmia are burrowing spiders, so they mainly live in underground burrows that are closed off by hatches. They therefore spend a good deal of their time hidden and are also relatively small.

As you can tell in the video above, the spider is far from what one might imagine when thinking of an ordinary spider. In fact, it doesn't even look like something from this planet. 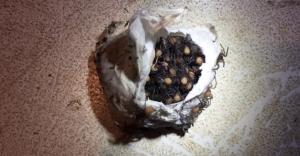 According to studies conducted, these spiders can survive temperatures as low as 13 degrees. But it’s much colder in Sichuan during the winter, which suggests that their ability to withstand freezing temperatures may have been underestimated. Cyclocosmia are amongst some of the oldest recorded spiders in China.

Zhao Li claims that there are similar descriptions of this spider in the Er Ya, the oldest Chinese dictionary that was written between the 5th and 2nd century BC.