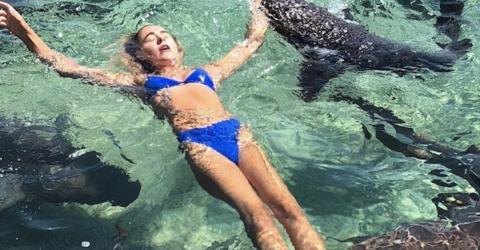 Instagram Model Katarina Zarutskie got into a spot of bother whilst on holiday in The Bahamas. After going into shark-infested waters, the young American was attacked by a five-foot nurse shark leaving her with some bite marks.

When going on holiday most of us just like to chill out by the beach, with a nice cold drink on the side and enjoy the paradisiacal pleasures of doing nothing. However, for one nursing student and model, this was far from the case.

Whilst on holiday in The Bahamas with her boyfriend, the young American woman decided to jump into shark-infested waters to pose with the animals… and of course, it was all for an Instagram photo. Posting several snaps, Katarina appears in the water without a care in the world with several sharks circling beneath her. Inevitably it didn’t end well.

All of a sudden, an appropriately named, five-foot nurse shark, lashed out, viciously bit into her arm and dragged her underwater. Speaking to Inside Edition, she said: “It was a very scary experience, I was pulled underwater for eight seconds”. After a horrifying struggle, she got away but not without being left with scars and bite marks on her arm.

The area of the Bahamas that the incident took place is known as Staniel Cay Island and is famous for its picturesque blue waters. Despite the terrifying ordeal, the model said she would go back and do it again.