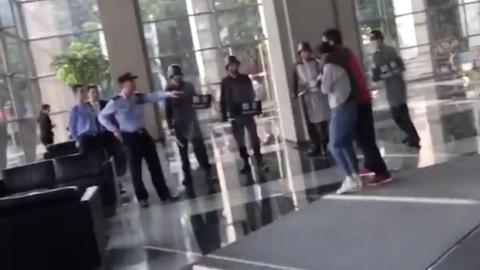 This isn't something you see every day. This passer-by heroically took down this man who had taken a woman hostage when the rest of the police were too afraid to intervene.

Though he was acting hysterically and was surrounded by armed policemen holding riot shields, the officers did not dare to intervene in this hostage situation for fear that the man might hurt the woman or that they would worsen the situation in any way.

The man, whose demands or reasons for taking the woman hostage are unknown, was eventually charged at by a brave passer-by, who grabbed the man's knife-wielding arm and threw him to the ground with a spectacular judo move.

This brave intervention allowed the woman to be hurried off to safety while other police officers stepped in to detain the man properly, whose arm is said to have been broken during the takedown.

Read also
He Stole A Man's Wallet On The Tube... Moments Later He Saved His Victim's Life

Check out the video above to see the impressive footage that went viral. It's good to know that there are still brave people like this man left in the world!