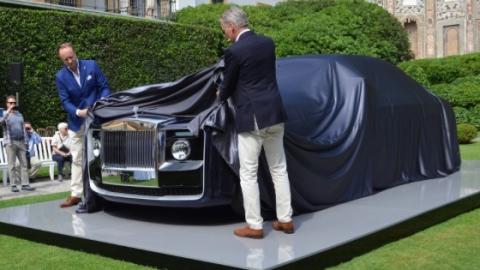 The Rolls-Royce Sweptail has been crowned the world’s most expensive new car produced! The price tag will surely leave a few people gobsmacked.

Rolls-Royce has once again upped the ante in terms of luxury. At the Concorso d'Eleganza Villa d'Este in Milan, Italy, they unveiled their newest crowning jewel: a vehicle which costs a near whopping £10 million. This luxury, one of a kind car has now been crowned the most expensive new car in the world, dethroning the Lamborghini Veneno Roadster by margin of nearly 300%.

This Sweptail is entirely unique, commissioned by one anonymous buyer and created by hand. Resting on a Phantom Coupé platform, this piece of automobile excellence was designed to mimic the style of the 1920s. Truly an accomplishment.

Check out the video above to see this deluxe car for yourself!

This Boeing 787 Is The Most Luxurious Plane On The Planet

This Is Where Billionaire Richard Branson Spends His Holidays

#record
Contact
To ensure that we can best respond to your question, please choose your desired department
No connection
Check your settings