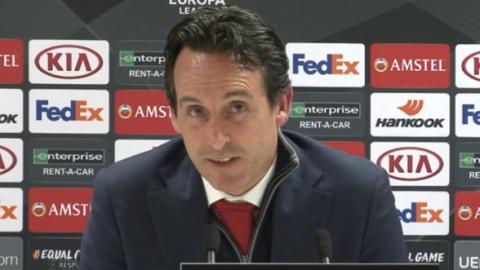 The man responsible for a good start to the season for Arsenal, former PSG trainer Unai Emery explains his managing style.

Criticized during his time at Paris Saint-Germain, Unai Emery is now very popular at Arsenal, where he is doing a really good job. The Gunners actually qualified for the round of 32 in the Europa League, came fifth in the Premier League (where they haven’t lost a game in the last fourteen that they’ve played) and have been finishing games with a flourish that fans are really liking.

But how does he manage this group of footballers and plan for what could happen during a match? Unai Emery answered this recently in a press conference.

‘I think every player is used to playing a lot of matches in a week, in a month, in a year. I think we need every player and we also need to play well, rest well, and recover well so we can play other matches well. This competition (Europa League) for us is very important because it’s a title, and in this way it’s also a way to get into the Champion’s League next year,’ he explained.

He then gave away his true secrets.

‘Our process for each match is like that: rest, play, rest, play and use the players with a good performance and who are committed so we can play at 100% capacity.’