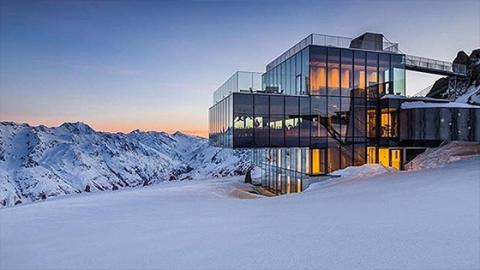 Listen up fans of the famous secret agent 007, a new museum dedicated to the cinematographic work has opened in the Austrian alps! It has been open to the public since July 12th.

The 007 Elements museum was designed by Austrian architect Johann Obermoser and Bond's artistic director Neal Callow, who worked on Quantum of Solace, Skyfall and Spectre, among others. Building this museum at the top of this mountain was obvious to the two men who imagined the location could be the headquarters of a classic Bond villain.

To get to the 007 Elements museum, visitors have to take a cable car up almost 10,000 feet above sea level. At the top of the Gaislachkogl mountain in Sölden, it is completely integrated into the landscape, and thus well hidden. The museum is right next to the Ice Q restaurant. This minimalist glass structure served as a backdrop for the Hoffler clinic, in which Madeleine Swan, played by Léa Seydoux, worked.

Everything in the museum, from the narration to the effects of light and shadow, was designed to give visitors an experience closer to a film than a traditional museum.

And for fans of James Bond cars, the iconic Jaguar and Land Rover from the movies will also be on display!