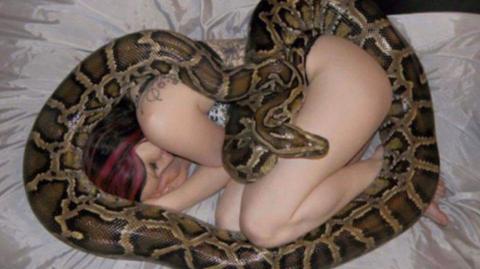 This woman often slept with her python. But after a visit to the vet she realised that her habit was more dangerous than it seemed - no brainer right?

Every night, this woman used to sleep with an enormous seven-foot python.When she lay on her stomach the reptile would lay from her head to her toes in what she thought was a beautiful bonding moment. That is until she noticed that her snake had started to starve itself.

The worried owner took her pet snake to the vet to make sure the animal wasn't sick. But, when he asked about the snake's daily routine the owner was greeted with a horrifying surprise.

What the vet told her was shocking. It turned out that the python was fasting in order to prepare itself for a big meal - its loving owner. The vet explained that when the python moved and curled up around her during the night, it was to better judge the size and weight of the young woman. In other words, the python was sizing the woman up and getting ready to eat her!

Her concern for her snake undoubtedly saved her life. We definitely hope she's learned her lesson and isn't sharing her bed with her unusual pet any longer!

Are pythons safe pets to keep?

Owning any animal requires some kind of education and responsibility, what kind of food does it need? What kind of environment does it like? What are the signs it's trying to kill me? Besides the controversy involving the trade and care of exotic pets such as pythons, owning one can be very dangerous.

Back in January 2018, National Geographic reported that one man, Dan Brandon, had died after sharing a photo online of his eight-foot pet python 'Tiny' curled up around his shoulders. Now, anyone who knows how a python hunts and kills their food would know that this isn't a good sign and definitely not a 'sign of affection'.

In fact soon after the image was posted, the man was found by his parents, dead in the very same spot. Brandon was found with the python in the room where he also kept another ten snakes and 12 tarantulas, which you'd think is a sign that he knew his stuff about exotic pets.

So, next time you consider buying a snake as a pet, keep in mind that they are essentially wild animals and accidents do happen.

Check out the video above and get the full story, as well as check out some footage that'll have you definitely second-guessing the sanity of this woman!