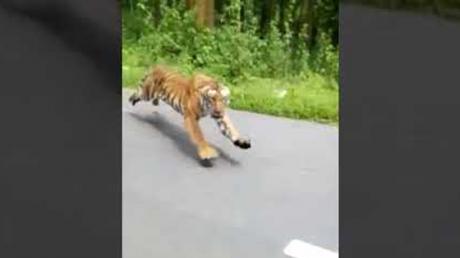 Life is so fragile - as this video of two bikers narrowly escaping from a tiger in India proves.

In India, inside a nature reserve, two bikers experienced the scariest moment of their lives. It was immortalised by a video - which has since gone viral and which you can watch for yourself at the top of this article.

In it, you can see a tiger relentlessly chasing the bike. After crossing the road, it positioned itself to attack. After getting less than two metres behind the rear passenger, the tiger finally reached the forest before disappearing, leaving the two bikers shaken but unharmed.

A wave of indignation

This video has caused many reactions, but not for the usual reasons. Indeed, far from being amused by this scene, most Internet users were shocked.

And for good reason, because in the video, you can see that the men are entering and 'intruding upon' areas which are reserved for animals, far from the many problems that humans can cause.

Following this wave of indignation, local authorities had to specify that the two men on the bike were indeed part of the nature reserve's staff and were, therefore, had the right to be there.