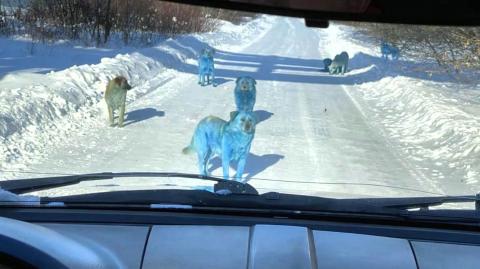 Stray blue dogs have been seen in Russia. The colour of these animals is linked with the presence of an abandoned chemical factory in the region.

At first glance, these images might look doctored or seem like a bad joke. However, the pictures of these blue dogs are indeed real. They were taken on February 11, 2021 by residents of Dzerzhinsk, in central Russia. You can see six stray dogs on the side of a road with a very unusual and decidedly unnatural colour. So what is the reason for this azure complexion?

The culprit is said to be an abandoned chemical plant

These pictures were published by Alekseї Ganine and then shared on the Russian social network Vkontakte. Initially, some Internet users thought it was a thoroughly unfunny joke.

But the Russian media Ria Novosti decided to address of this strange case, and implicated an abandoned chemical factory which handled the production of acrylic glass and hydro-cyanic acid. They then interviewed Andrey Mislivets, who handled the bankruptcy of the Dzerzhinskoye Plexiglas company in 2015. He considers probable the hypothesis that these dogs have come into contact with chemicals abandoned on the plant.

Stray dogs live in the area. Maybe in one of the buildings they found some sort of chemical residue—copper sulfate, for example—and rolled around in it. Several years ago I heard that some dogs were dyed in certain unnatural colours. But I cannot afford the cost of catching these stray animals and neutering them.

What are the effects on the dogs' health?

These dogs would therefore have rolled around in chemicals, probably copper sulfate. But is their health in danger? Veterinarians from the ZooZashchita-NN clinic in Nizhny Novgorod revealed that the dogs are unlikely to be 'in danger.'

That thinking is quite disagreeable to Kelly O'Meara, vice president of Humane Society International.

The dye on their fur implies that they have had direct contact with or even ingested potentially toxic or harmful substances. This could lead to painful burning or itching of the skin or internal bleeding and diseases that can lead to death.

Local authorities took charge of the situation and contacted the owners of the private land on which the dogs are thought to roam, so as to obtain permission to handle these dogs. This phenomenon is reminiscent of what happened in India in 2017, when blue dogs were also discovered. The investigation at the time had also pointed to industrial waste released into the waters.