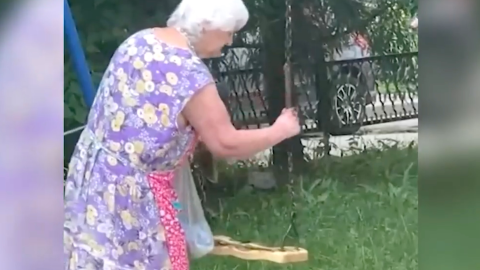 Local residents in Russia have been horrified to discover that an old lady had been smearing faeces all over local swings in a rather bizarre and angry protest.

We understand the trope of some elderly's complete disdain for children. Perhaps they are envious of youth or maybe their hip pain is affecting their mood...

Either way, nobody expected to find a 90-year-old smearing poop on a public swing set.

Of course the poopy protest doesn't come at the expense of any reasonable request. It turns out the grandma has been engaging in this nasty act for years all because she'd rather have a flower bed than a swing set.

This time, the fearless ol' lass was literally caught brown handed as she carelessly spread the human faeces with her bare hands and she didn't even seem to notice the person filming behind her. The narrator of the video was heard in the background:

Dear Gatchina residents. Our swings are getting covered with s*** again.

The authorities have been warned

Local residents are understandably sick and tired of the situation and have called the authorities on multiple occasions but the police have neglected to do anything by claiming the woman was mentally disabled, making the matter an issue for social services.

To make a s***tty situation worse, residents claim that the 90-year-old attacks them with a shovel if they attempt to clear away the gnarly mess. The woman has even tried to dig out the swings herself but has repeatedly failed.