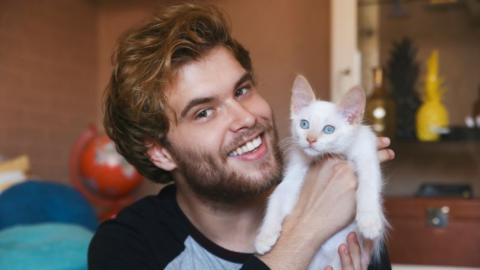 Now, we've gotten nothing against cute and cuddly kittens. Nothing melts your heart like watching a cat chase a piece of string across the floor. Unfortunately it seems that if you as a man want to flaunt your love for your feline friend but also want to date women, you're going to have to choose between the two.

This is the harsh reality that was concluded through a recent study done by researchers at Colorado State University. It found that women were less likely to be interested in dating a man who was pictured as having a cat.

Traditionally speaking, it's found that women seek out men with more masculine characteristics, instinctually seeking out 'good genes' to procreate with. Now, that being said, we've come a long way from our animalistic tendencies, everyone's different and we all like what we like. We would never yuck your yums but it seems that science is speaking a bit of truth here, in the sense that women are still seeking more manly men and it would seem that a man holding a cat just doesn't do it for them.

The study used a group of 708 women ages 18-24 who were given pictures to swipe right or left on (say yes or no to). Two different men with two different pictures, one holding a cat and one without.

The responses of the women showed definitive evidence that the men were found to be less desirable when holding a cat compared to being alone in the picture. According to the authors of the study, it was found that men that were pictured holding a cat were viewed as less masculine when holding the cat. They actually considered them to be higher in neuroticism, agreeableness, and openness, however, less dateable.

This doesn't mean that men who own a cat will find it impossible to date... just perhaps leave it as a topic of discussion for when you're actually already on the date!