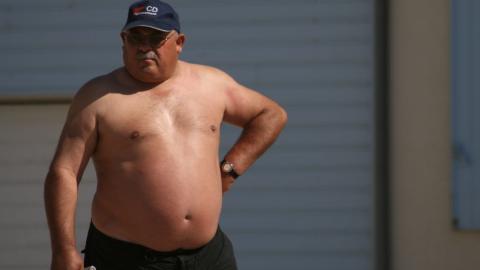 Don’t let appearances fool you! For several years a Californian was mocked about his ‘beer belly.’ It was not until having a CT scan that it was revealed that this abdominal weight was actually due to the presence of a dangerous tumour weighing several tens of kilograms.

As the famous saying goes, ‘don’t let appearances fool you.’ Hector Hernandez is able to attest to this first-hand. The case of this 47-year-old Californian was revealed in a Washington Post article.

‘I've always been a big man,’ he told the American newspaper. That's why he had not paid too much attention to his weight gain in the last two years, but when he noticed that his arms and legs seemed to be shrinking as his stomach grew bigger, he began to wonder. In addition, the stares of strangers on the street at his weight of 21.5 stone and the jeers of his relatives about his ‘beer belly’ even though he 'very rarely consume[s] this drink’ only added to his questioning.

It was when he began to suffer from heartburn, constipation and sometimes having trouble catching his breath that he decided to consult a doctor. The first doctor who examined him simply brushed aside his worries by explaining that ‘everyone had a different physical weight distribution.’ ‘I thought I was just fat,’ says Hector Hernandez.

But finding that his belly was ‘heavy and hard to the touch,’ the 47-year-old wanted to have a second opinion. It was after a CT scan that doctors were able to diagnose a retroperitoneal liposarcoma, a particular form of malignancy that develops in fatty tissue. At the announcement of the diagnosis, Hector Hernandez felt both ‘shocked and reassured’ to finally know the reason for his condition.

He was operated on last summer for this tumour to be removed. The one-hour operation went well but a kidney, which had been damaged by the presence of the tumour, had to be removed.

William Tsen, the surgeon-oncologist and assistant professor at the Keck School of Medicine at the University of Southern California who performed the surgery, said the removed tumour weighed nearly 77 pounds. ‘It's certainly the biggest I've had to remove,’ he told the Washington Post, adding that as an expert in sarcomas, he has had to surgically remove a dozen but they usually weigh between 9 and 13 kilos.