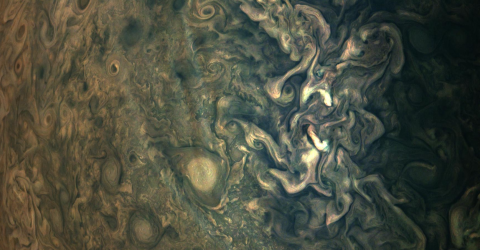 While we are all at home, the National Aeronautics and Space Administration programme is still hard at work. Recently NASA has released some high resolution images of Jupiter and they are awe inspiring.

NASA's Juno mission recently made the 776.76 million km journey to Jupiterwhere it took some encapsulating images of the gas giant's northern hemisphere.

The images taken on February 17, 2020, show Jupiter's northern hemisphere being reminiscent of the inside of a marble with its giant gas swirls. One of the features of the Van Gogh-esque planet is the long, thin bands that run vertically down its circumference. These streaks have been present since Juno's first close trip to the planet in 2016 and are made up of layers of haze. Scientists do not know yet what the haze is made of or how they form but they suspect that the jet streams on either side of the bands may have something to do with the phenomenon.

Check out the video above to see some more close up pictures of the gas giant and to learn some more interesting facts about Jupiter!