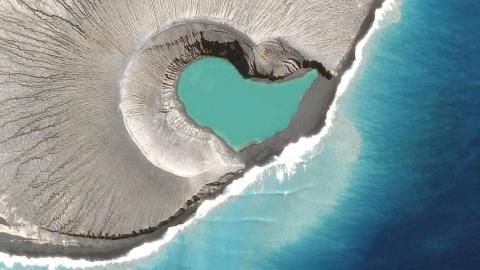 In 2014 an island appeared in the pacific ocean called “Tonga-Hunga Ha’apai”. It fascinated and intrigued scientists at NASA. It has recently developed into a real oasis for flora and fauna to flourish. But there is a limit to life.

A mere three islands have appeared on our planet over the last 150 years. Tonga-Hunga Ha’apai is one of them. It was formed after a marine volcano erupted in the Pacific Ocean in December 2014. Scientists at NASA were like kids at a candy store in the face of this development. The formation of this island meant that scientists could now be enlightened “on how the volcanic landscapes interacted with water on the planet Mars a very long time ago”. Especially since it is the first of this kind of island “to have been formed since satellites began taking photographs of the Earth on a regular basis,” says Epoch Times. Its evolution is therefore being analysed scrupulously.

The mysterious island is composed of “mud” and “light colour clay”. In recent months various flora and fauna have settled on the island.

One of the NASA scientists made an unfortunate observation that the island is in fact eroding away, saying, “The island is being eroded by rain much quicker than anticipated. We focused on the erosion of the south coast, where waves collapse, which is happening right now. The whole island seems to be crumbling too. This is another aspect that is very clear when we stand before huge ravines formed by erosion. It wasn’t even there three years ago and now it is two metres deep.

Check out the video above to see more of this mysterious island for yourself!