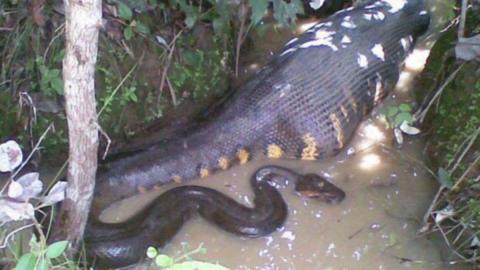 A video shot in Brazil shows a green anaconda swallowing, then regurgitating its meal, which happened to be too big, even for a snake that can easily be more than 6 meters long.

Brazil is home to some of the biggest snakes in the world, including the green anaconda (Eunectes murinus). Male green anacondas can be as long as 7 meters and weigh up to 200 kg. They're considered the largest and heaviest species.

Run-ins with a green anaconda can be quite an overwhelming experience, especially when you're not expecting it. They usually hunt at night, however, they sometimes do it during the day, so the person who filmed this video was "lucky" to come across an anaconda eating its lunch.

In the video, the snake can be seen grappling with an imposing mammal. And despite its size, it looks like the anaconda bit more than it could chew, as it ended up regurgitating the animal it had just swallowed in front of the camera.

This astonishing footage, which was captured in the heart of the Amazon rainforest, made many viewers wonder what exactly this anaconda's prey was. Some say it's a cow because it has spots, while others think it's probably a big rodent, such as a capybara, which is happens to be one of Brazilian anacondas' favorite meals.