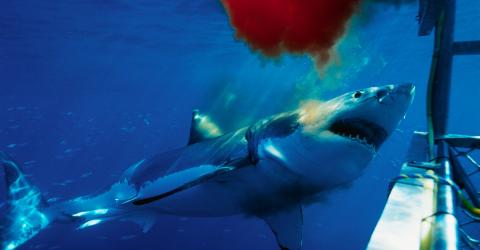 It's common knowledge that there's nothing more attractive to sharks than human blood; after all, it's what alerts them to human activity in the first place. Well, as this group of investigators discovered, it's not actually that simple.

You have undoubtedly seen it in films. Picture the scene, a character falls in the water, and ends up getting hurt. Soon after, their blood attracts all the sharks in the area and these predators gang up on their prey like playground bullies. Like a lot of people, you probably think that these sharks were attracted, excited even, by the blood.

To put this theory to the test, investigators did not hesitate to throw themselves in the water. In the first part of their experiment, they plunged themselves in the water, just off the shore of the Bahamas, into shark infested waters. With them, they took a long pole with a container on the end that was full of human blood.

Once this apparatus opened, the red liquid started to seep out and spread through the water. And how did the sharks react? Well they didn’t! The investigators then deduced from this that sharks aren’t really interested by human blood.

Blood yes, but not just any

But what about blood from fish? To look into this, they went back into the water in the same place, with the same apparatus that was full of barracuda blood this time.

As soon as they got in the water, the sharks couldn’t wait to get their fins on the blood! They swam straight to the source of the blood, tried to open it themselves by knocking it out of the investigator’s hands, which is when they decided to resurface.

This time, the verdict was conclusive: fish blood attracts and actually excites sharks!

Once again, despite their reputation for being cold blooded murderers, sharks have shown once again that they are not interested in humans as their prey. So you could actually swim with a gaping wound without feeling the needing to fear for your life! That is, if you forget about the gaping wound of course…

Check out the video above to see the daring experiment in action...