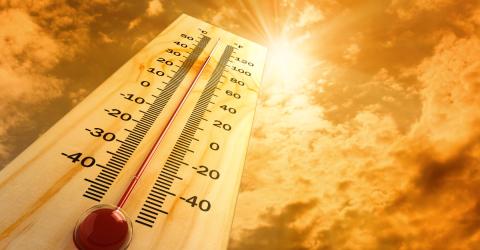 As if you didn't need another reason to panic, researchers have come to a devastating verdict regarding global warming.

We're finally at the tail end of summer, and looking back at it now we can safely say it was one of the hottest we've had to deal with. Although this heat can be good for your mood, it won’t always be as easy to deal with... and things could be getting worse. This has been confirmed by a study carried out by researchers at the University of Hawaii at Manoa in the Nature Climate Change journal.

According to these researchers who are quite worries, a third of the world’s population could be affected by some deadly heat waves by 2100. And why? Because of CO2 emissions. Carbon dioxide is the main greenhouse gas released by human activity and this gas being released into the air is mainly what has caused climate change and is what ecologists have been focused on for years.

The study as well as the researchers who are also the authors of the study are clear. If CO2 emissions don’t stop rising, 74% of the world’s population will be exposed to heat waves which could prove deadly by 2100. If they continue to rise at the current rate, this increase in greenhouse gas emissions could increase the temperature by an average of 3.7°C.

‘Even if greenhouse gases are aggressively reduced, at least 48% of the population will face deadly heat waves by 2100’ says the authors of the study. To come to these conclusions, researchers have looked into scientific literature from 1980 to 2014 and have meticulously looked for mortalities directly related to hot periods.

They have found a total of 783 episodes between this time period, with one of the most prominent being the heat wave in 2003 which is thought to be behind around 70,000 deaths in Europe. These recorded episodes that were used in the study span out over 164 towns, and 36 different countries.

A combination of factors

Air temperature, wind speed, humidity levels and other different characteristics have been identified during these hot periods and researchers have also been able to use some real data. Finally, the risk of ‘death’ from a heat wave could be due to both high temperatures as well as high humidity levels.

In these extreme cases, the body may not consistently be able to ‘thermoregulate’ which means control its own temperature and keep it constant.

‘When relative humidity is high, air temperature around 90 degrees (32°C) can become lethal, as sweating becomes less effective for dissipating the body’s heat,’ says Camilo Mora, professor at the University of Hawaii and main author of the study.

Tropical areas are therefore put under close watch during these periods since they are systematically more affected than other areas due to their temperatures and humidity levels that are higher than other places. But this isn’t exactly news, since it is said that more than 30% of the population have already been exposed to these deadly heat waves during certain periods and particularly during summer.

‘Many people around the world are already paying the ultimate price of heatwaves, and while models suggest that this is likely to continue, it could be much worse if emissions are not considerably reduced,’ concludes Camilo Mora in her press release.

It seems that climate change and global warming are, and will continue to, trigger catastrophic events that could very well lead to the end of civilisation as we know it.