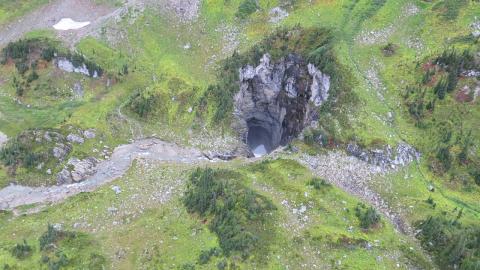 Researchers are ecstatic upon the discovery of this Canadian cave. In addition to its incredible size, it has also never before been seen by man.

An immense gaping abyss has just been discovered on a mountain slope in one of the most isolated corners of Canada. Nicknamed the Sarlacc Pit in reference to the dwelling of the fearsome creature that devoured Boba Fett in ‘Star Wars, Episode VI’, this could have even been the first time that the cave was discovered by man.

Hidden in the provincial park known as Wells Gray in British Columbia, the Sarlacc Pitt is so impressive and huge that it is even confusing explorers.

‘My immediate reaction was that there can’t be a cave there, it’s impossible,’ confessed geoscientist Catherine Hickson who was at the head of the exploration mission.

‘It’s huge. It is enormous. When you first see it, you just gasp because it’s just this huge hole in the ground.’

The cave (which is still waiting for an official name to be assigned) was discovered in April whilst a helicopter was flying over that was supposed to be counting caribou and was an extremely lucky discovery that is really exciting researchers.

The team claims it has a number of characteristics that, when combined, make it of ‘national significance’.

‘[It] is a major new find in Western Canada and promises a dramatic new chapter in the story of Canadian cave exploration,’ stated researchers.

‘I’ve been in some of the biggest caves in the world, and this thing has an entrance that is truly immense, and not just by Canadian standards,’ commented archaeological surveyor John Pollack.

‘When you’re standing on the edge looking down into it, your line of sight is nearly 600 feet (183 meters).’

It is surprising to note that this monster of an abyss, measuring 100 meters long by 60 meters wide (on the surface) has until recently gone completely undetected. According to Hickson, 20 or 50 years ago, the cave could have simply been full of snow throughout the year which could be why it went completely unnoticed.

On this basis, while taking into account the isolation of the place as well as the absence of references made to its existence in literature, researchers think that it is possible that this is the first time it has been discovered by man.

‘Even in this day and age, when we think we know everything, and we’ve explored every place, we can be surprised,’ concluded Hickson.