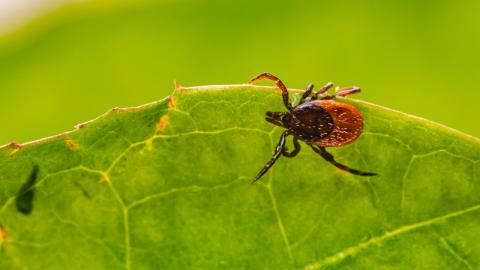 Brits have been warned to cover up during their holidays, as deadly pests that could trigger lyme disease have been attacking more pets and humans.

The sudden heatwave has been ideal for everyone who’s been looking forward to bronzing in the summer sun. But, experts are warning Brits to cover up during their holidays because other creatures have also come out to play, or rather to feed—blood-sucking pests. Professor Sally Cutler from the University of East London explains:

Many people have rediscovered the countryside during Covid and will be taking holidays in the UK.

Following the recent rain and with nice conditions now, the temperature, humidity and timing is ideal for ticks.

Vets in the UK have also corroborated the sudden surge, and are reporting an increasing number of cases in which animals need to get these vampire parasites removed. But humans are at risk of getting bitten too. UK conservation charity, Woodland Trust is advising all walkers to cover their skin, and tuck their pants into their socks to avoid getting munched on. They’re also asking people to stay away from dense vegetation. Bringing an insect repellent is also a must if you're taking a walk through the forests.

How can you tell if you’ve been a victim of a tiny parasite? Most people don’t realise they’ve been preyed on until three or four weeks after the bite, which is when a bulls-eye rash, blister, or lump appears on the skin.

Some bites can be harmless, while others can trigger the deadly lyme disease in humans who have already been previously bitten by an infected animal. In the UK, around eight people get the disease from tick bites every single day. And while the disease is easy to treat in the early stages, it can cause heart attacks, paralysis, and arthritis.

It is also important to be cautious of other lyme disease symptoms—like fever, headaches, joint pain, and loss of energy—because not every bite will form a rash.

Most ticks will escape unnoticed but if you happen to see one on yourself, a child, or your pet, remove it immediately using tweezers and clean the bite with antiseptic, or soap and water. Monkeypox: Outbreak of Viral Rare Disease Has Been Confirmed in the UK

Thanks to COVID, 2020 Has Been the Worst Year for Mental Health Since World...
Read also