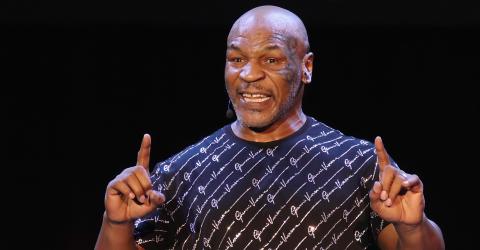 Mike Tyson is clearly still in amazing shape for his age. After seeing one of the most recent videos that he shared online, some could say that he's ready to hop back in the ring!

At 53 years old, Mike Tyson is far from being past his prime. The former two-time World Heavyweight Champion proved it with a video he shared on Instagram in which he performs some of his most famous moves, proving that the gloves well and truly still fit.

In the video (see above), the legend looks to be having some fun at home with his dog, who seems a bit taken aback by his speed, it has to be said. Although ‘Iron Mike’ hasn’t expressed his desire to get back into the ring, he nevertheless still appears to be in tip-top shape.

Even today, legions of fans imagine possible fights between Tyson and active boxers. And there is no doubt in our minds that Mike Tyson would still be able to take on lots of the current heavyweight fighters nowadays.

Over his 20-year-long career, Mike Tyson became one of the most mythic boxers in the world. Tyson reigned as the undisputed heavyweight champion and holds the record as the youngest boxer to win a heavyweight title at just 20 years old.

Boxers that took him on know that the fight was as much psychological as it was physical: Tyson won some of his fights before even setting foot in the ring. Mentally, it's difficult to contend with the prospect of taking on a prime-era Tyson. There is something about Mike that, although we can’t see it, his opponents can feel from a mile away. Tyson truly had boxing figured out, inside and outside of the ring. As George Foreman once put it:

'Iron' Mike Tyson is the last boxer who was truly embraced by the media. They followed him around. You didn't know what he was going to do next: bite you, cut you, fight you. When you think about it, that defines him - it was an exciting adventure.

Despite his 6 losses, Mike Tyson has 50 victories under his belt, of which 44 didn't go the distance. This record is incredibly impressive for the best boxer of all time. Trevor Berbick, Franck Bruno, Larry Holmes and Michael Spinks are just some of the fighters that have faced Tyson’s wrath at one point or another. Today, the legend is enjoying his well-deserved retirement, but he is still a role model for young boxers and other young athletes all around the world.