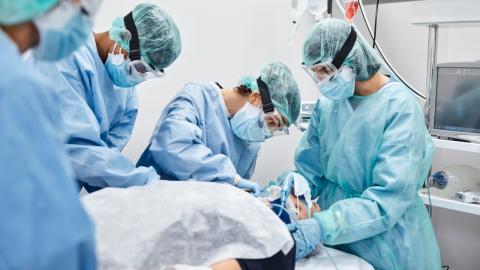 British doctors recently reported the first case of sudden total deafness as a result of the coronavirus which is a possible new side affect that we all should be aware of.

The number of COVID-19 patients continues to rise exponentially around the world. To varying degrees, patients can experience certain side effects as a result of being infected with the virus. And British doctors now believe that deafness could in fact be one of them. An article published by the medical journal BMJ Case Reports claims that they have found the first patient in the country to have experienced sudden total deafness as a result of the coronavirus.

Despite the considerable literature on COVID-19 and the various symptoms associated with the virus, there is a lack of discussion on the relationship between COVID-19 and hearing.

As the doctors have reported, the patient was a 45-year-old man who was admitted to hospital after catching the coronavirus. Since he was asthmatic, his condition became rather fragile and he had to be put on a ventilator in intensive care.

He was eventually discharged after a few days of treatment. But a week after being released from the hospital, he noticed he had tinnitus in his left ear. Not long afterwards, he lost his hearing completely and returned to the hospital to get checked out.

At the hospital, the otolaryngologists found no signs of inflammation or deterioration of his hearing system. However, a hearing test confirmed that he had, in fact, gone deaf.

As a result, the patient was put on a corticosteroid-based treatment that allowed him to recover his hearing a little. After further tests, the doctors ruled out any other illnesses that could have caused this deafness, which led them to conclusively believe that the coronavirus was to blame.

To avoid this type of situation happening again, doctors recommend performing diagnoses on patients with COVID-19 at the time that they are admitted to hospital in order to establish much more effective steroid-based treatments as soon as possible.

However, as doctors have pointed out, hearing loss is a common affliction for lots of patients and there are around 5 to 160 cases per 100,000 people recorded every year. When this happens, it is usually the result of a blocked blood vessel or a viral infection.

It’s also worth mentioning that, in this case, doctors found cells in the patient's ear that were similar to those that line the lungs when a patient is infected with the coronavirus. These cells are also responsible for inflammation and an increased production of cytokines (proteins that are important in cell signalling) which also both contribute to hearing loss.