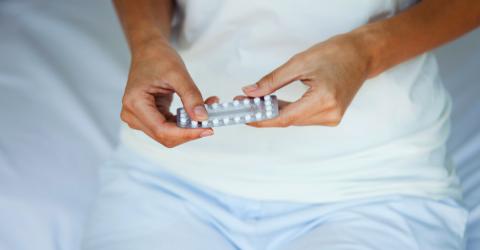 American scientists have developed a new contraceptive pill that you only need to take once a month. It has been developed as a solution for people who forget to take the pill every day, and as a result, will reduce the number of unwanted pregnancies and consequently, abortions.

A team of researchers in Massachusetts Institute of Technology (MIT) revealed the results of their study in Science of Translational Medicine journal on 4th December this year. They recently managed to develop a contraceptive pill that you only need to take once a month for it to be effective.

How does this monthly contraceptive pill work?

The pill in question looks a bit like a six-pointed star that folds up into a capsule to form a tablet that can be swallowed. Once ingested, the pill expands in the stomach where it remains for several weeks. The different layers of polyurethane that the star’s arms are made up of are progressively broken down and dissolved by the gastric acid in your stomach which allows the hormones to slowly be released into your system over this period of time.

The stomach digests the pill bit by bit until it reaches the middle of the star which contains another type of polyurethane which is even more resistant to gastric acid so that it continues to work as a contraceptive. Three to four weeks after ingesting it, the arms are emptied of their hormones and the pill naturally disintegrates and is digested in the stomach.

This monthly contraceptive pill has so far only been tested on pigs but has been found to be 100% effective. Researchers are currently already preparing for trials to be carried out on female volunteers within the next few years which should prove its efficiency. Additional trials will also be carried out to keep a close eye on the women’s health and the possible side effects before it will then be ready to be released to the public.