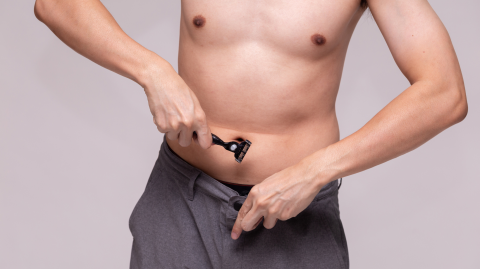 According to a very serious study, shaving your private parts could be harmful if you're a man. Read on to find out why.

Gentlemen, it looks like it's time to put down the razors, the scissors and the shavers because shaving your downstairs region may be putting themselves in harm's way.

'Manscaping', it's an activity we are all intimately familiar with, but according to a joint study conducted by several universities, this weekly, monthly or god forbid, yearly habit may actually be putting you at risk of some pretty serious stuff.

According to the study published in BMJ Journals,men who shave their private parts are more likely to catch sexually transmitted diseases than those who don't. The shocking conclusion was drawn by several universities including those in Texas, California and Missouri where the objective was to collect and analyze data from 14,000 people between the ages of 18 and 65.

The results are startling as it showed that waxing or shaving increases the risk of catching an STI by a whopping 80%! And to make matters even worse, a whopping 13% of the respondents of the study had already had an STD.

Those who shave the most (at least 11 times a year) are more likely to get herpes or the human papillomavirus. However, they are less likely to get crabs, for obvious reasons. And compared to those who don't shave, men who 'manscape' are three times more likely to have STIs -- make it four times if you wax or shave religiously.

According to Dr Charles Osterberg, the increased risk of STIs comes as shaving can cause small tears in the skin, which makes it easy for viruses and bacteria to enter the body. Also, men who shave regularly tend to have sex more often, which puts them at a higher risk of catching STIs.

So, if you want to avoid an STI it's best to keep a little hair down there...And don't forget to use protection!

According to This Study, Using Emojis Could Increase Your Luck With the Ladies

This Is How Often You Should Be Getting Busy, According to Science
Read also
No connection
Check your settings