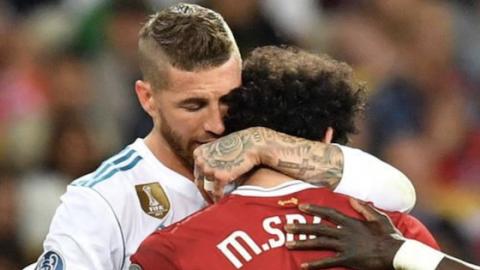 After Real Madrid’s victory in the Champions League final, most people are only really talking about Karius’ goalkeeping nightmares and the incident between Ramos and Salah, which resulted in the Egyptian going off injurqed. It’s time to calm down.

It was probably at this moment when the final game in the Champions League took a U turn. In the 31st minute, a clash between Sergio Ramos and Mo Salah ended up with the Egyptian international suffering a shoulder injury, meaning he had to give up his place to Adam Lallana. Having clearly sparked big reactions, it is clear that some viewers may have been too affected by the emotions the final to make a fair judgement.

The fact is, we’ve seen this type of thing from Ramos before in football matches. After the incident happened, the attacker and the defender on Ramos’ team both knew that these guys were going to end up on the ground. So to make sure he didn’t, his two teammates grabbed him by the arm. In the pictures, it’s obvious Salah didn’t want to move his arm and was even the first one to engage. Mo Salah’s injury is obviously unfortunate, but it was nothing more than an unfortunate sequence of events. The Liverpool striker could fall over 100 times in the same way without feeling the slightest pain.

So your mate, who swears blind that Ramos is one of the worst cheats football has even seen and reckons he should perish in an Albanian prison, probably doesn’t understand anything about football. This sport is definitely not just 11 vs 11. On the pitch, there’s also the referee and his assistants who are major factors, just like the others players.

Ramos has known this for a while and, like his opponents, puts constant pressure on the referee. As captain, he’s allowed to be part of all the discussions that take place with the officials. During these crucial moments, Ramos thinks of only one thing, his team winning. This is what differentiates him and many other defenders that may be equally as technically or physically talented. Ramos deals with pressure like no one else. He shapes it, deals with it for his teammates and directs it at his opponents.

Once the match has ended, the pressure fades away and Ramos becomes human again. He soon felt bad about Mo Salah’s injury and wished him a speedy recovery.