Upon studying ancient rock samples, researchers found new evidence that confirms that a mass extinction of all life on Earth took place 2 billion years ago.

The "Great Oxidation Event" occurred 2 billion years before our time

More than 4 billion years ago, our planet was born; then came the oceans and life, where the first single-celled organisms coexisted. About 500 million years later, photosynthesis, a natural process that allows living organisms to capture and transform sunlight into energy, came about. If we go back a little further in time, we'll find an important episode in the history of our planet, "the Great Oxidation": a time during which there were significant amounts of oxygen in the atmosphere, which altered the planet's climate, eventually causing the longest ice age ever in its history.

New evidence points to a greater extinction than we thought

To better understand this period, researchers went to the Betcher Islands, a Canadian archipelago located in the Hudson Bay, where field conditions were favourable to take samples from barite deposits that still have traces of that period. Although the scientific community was already aware of the impact of this period on living things, researchers were able to confirm that a far greater mass extinction than we could have imagined occurred in the oceans at the time.

Before the Great Oxidation, oxygen was weakly present in the atmosphere, because it was trapped in water and rocks. The single-celled organisms that lived at the time absorbed carbon dioxide and light for food and, as waste, released oxygen, a chemical element is vital for us but toxic to the living beings of that time.

While measuring the oxygen, sulfur, and barium isotopes found in the rocks collected in Canada, the researchers found negative oxygen isotopes dated shortly after the Great Oxidation.This phenomenon could only be explained by an abrupt reduction in the reproduction of organisms, which suddenly reproduced 5 to 200 times less. 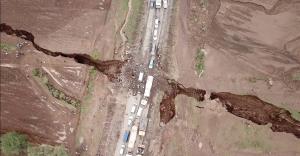 The reason for the extinction: "oxygen pollution"

The increase in oxygen and the overpopulation of organisms caused several chain reactions, both in the atmosphere and in water, where many metals started to disappear, and where the essential nutrients needed for life started to run low. So, a huge famine which got the best of the main living forms present on our planet at the time, causing the extinction of 99% of life on Earth. The Secrets Of Yellowstone Have Finally Been Uncovered