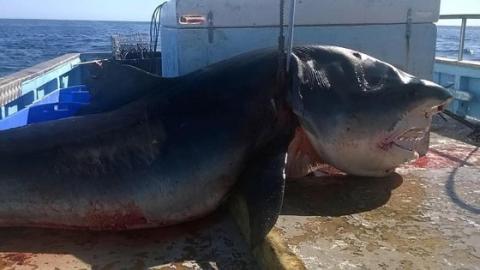 An absolutely massive shark has been found in the sea near Australia. Photos of this beast are being circulated on social media, but the real story is what could've killed a shark of this size...

It was on the Facebook account of an Australian man Geoff Brooks that the awe-inspiring photos first appeared. They show the body of a colossal tiger shark measuring almost 20 feet. Crazy considering the animal is not known to grow larger than 17 feet.

‘I was told it had been caught a little further away on the weekend,’ Brooks explains in his post. According to him, the shark was caught off Seven Mile Beach.

An act of cannibalism

Another fisherman named only as 'Matthew' told The Northern Star, ‘I was fighting a hammerhead and this enormous shark came up and swallowed it.’

However, the circumstances of the giant’s death remain unexplained. While some say that the animal must have been sold at the local market, others explain that it was transported to be examined in a research centre.

Neither of these hypotheses have been confirmed but the research centre told the Telegraph that it had nothing to do with them. So what could it have been?

This isn't the first time Australia has popped up in the news for dead-shark related reasons. However, this time the details surrounding the incident are far more cloudy...

Check out the video above to see this unbelievable predator for yourself!