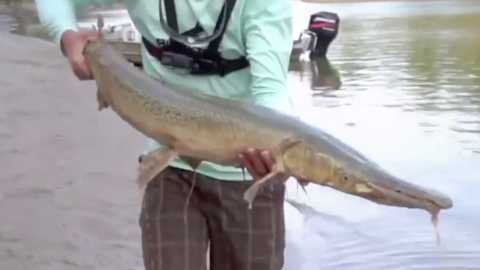 A fisherman captured an incredible 77 kg monster on Lake Texoma, in the state of Oklahoma, United States. The huge prehistoric fish appears most comparable to an alligator.

Zachary Sutterfield discovered the creature while fishing on Lake Texoma. He had the help of Richard Snow, a biologist from the wildlife preservation department in Oklahoma, to study the animal.

The catan fish, better known as crocodile fish, or De Beaufort's flathead, is the largest of its kind and also the largest that has been found in freshwater in North America. It has a very long head and its teeth closely resemble those of the alligator. This monster is more than 100 million years old.

Crocodile fish are ferocious predators that capture their prey on the surface of the water with their teeth. They pose no danger to humans though, as their diets consist of small fish and crustaceans. They were initially considered a threat to the local fauna, but now, they are hunting trophies prized by sports fishermen.

They are also bottom-feeding fish, preferring to remain solitary at the bottom of bodies of water, and then using their camouflage to capture prey. Zachary Sutterfield did not capture the largest crocodile fish in history. In 1930, a 150-kilo and 3-metre long monsterwas captured in the state of Arkansas.

They are not only found in the US though, but they are also common in the tropical waters of the Indian Ocean, the Pacific Ocean and the seas connecting the two. They are most closely related to the scorpionfish, a venomous species that can also be found in the Indo-Pacific. They are one of the most venomous fish in the world, with spikes covered in their venomous mucous.

Check out our video above to see this fish for yourself!