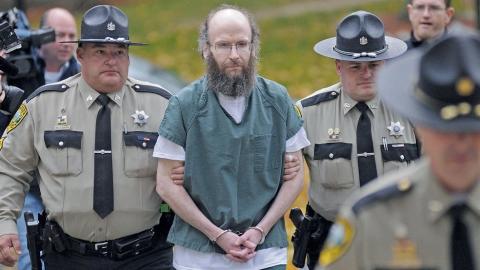 It’s an incredible story, but it’s true. Christopher Knight disappeared overnight to withdraw from society. He lived in the woods in Maine for 27 years, a few metres from habitation, without anyone ever noticing.

In 1986, sometime after the Chernobyl catastrophe, an ordinary 20-year-old American by the name of Christopher Knight got in his car. He drove and drove, then stopped, abandoned his car and took the direction of the dense forest in Maine. He only re-emerged from it in 2014, when he was caught red-handed during a robbery and arrested by police.

From 1986 to 2014, Christopher Knight lived as a hermit with no money, surviving on that which he had acquired through countless robberies made in the surrounding areas.

‘The loneliest man in the world’ built himself a shelter which was inaccessible other people: behind the rocks, obscured by trees and invisible from the air.

Only he knew the way to it. He also knew the forest by heart, and he never even left any trace there.

In the space of 27 years, the man only met one person by chance (a hiker), and the only thing he said to him was ‘hello’. It was the only word that he uttered during that whole time. Among other things, he occupied his time by reading books that he had stolen during one of his 1000 burglaries.

Knight’s story is an incredible one and has been adapted as a book – rightly so – which was written by the journalist Michael Finkel. It’s called ‘The Last Hermit.’