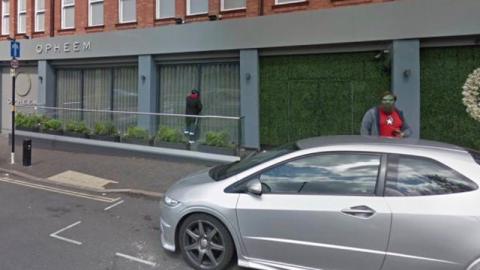 While navigating Google Street View, an English man in his forties suddenly ‘froze in fear’. In several photos that had been taken of Summer Row in Birmingham, there is a rather strange character with green skin who looks suspiciously grinch-like…

An alien? A man dressed up for Halloween? The Grinch? 47-year-old Stevie Hall couldn’t believe his eyes. While he was browsing Google Street View for a good place to park for a German Christmas Market that was being held in Birmingham, he suddenly found himself confronted with this creature.

A man, with brown hair, a beard, looked very sure of himself with his green skin and terrifying face.

‘Google Street View – Looks a bit like one of the Grinch’s relatives, don’t you think?’

‘I just froze in fear when I saw him and the hairs went up on the back of my neck,’ explained Stevie Hall to the Sun.

‘My friend and I thought we were seeing things and so had to check it again by putting in the postcode,’ he added.

Stevie doesn’t think it was a Halloween mask since according to Google, the photos were taken in April, not in October.

‘I searched for nearby conventions as well on that date and nothing.’ Stevie Hall is also convinced that the images can’t have been faked because ‘you can see there are reflections on the car.’

Troubled, the Brit who isn’t ‘really into conspiracy theories’ also looked on websites such as Amazon or eBay to see if a mask existed that was similar to the man’s face in the photo… But he couldn’t find anything. So, masked man or grumpy, green monster? Anyone got any ideas?