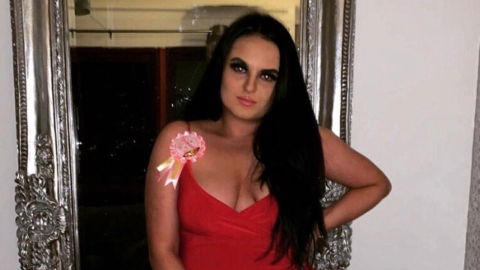 One woman’s innocent Instagram post managed to achieve viral status after one unfortunate, yet hilarious detail sent viewers into a laughing fit.

The post was uploaded by Connie White as she posed in a red minidress in front of a mirror from her home in from Falkirk, Scotland on Saturday night.

However, it wasn’t until she saw comments from friends on her post that the 22-year-old realised that her selfie contained an unfortunate yet hilarious detail.

The mirror in the photo behind Connie reflected the back of her ankle and heel at a strange angle that made it look like she had something between her legs that would conjure envy in even the most confident guy.

Sporting a sense of humour that would make any Scott proud, Connie posted the image on Twitter for all to see. She captioned her faux pas:

Cani believe a posted this on insta & someone commented abt how it looked like a had a d**k inbetween my legs.

Leaving viewers in hysterics, Connie’s post managed to buildup over 23,000 likes and 1,200 retweets. Some Twitter users still couldn’t quite figure out what the object in the mirror was actually supposed to be, and after struggling to get the penis illusion out of their minds Connie clarified that it was the back of her leg… not a third one.

One person commented after making the realisation themselves:

Yes I spotted it now after about a minute looking. Yes they're right, it looks like a big one alright.

When you see it, then can't unsee it.